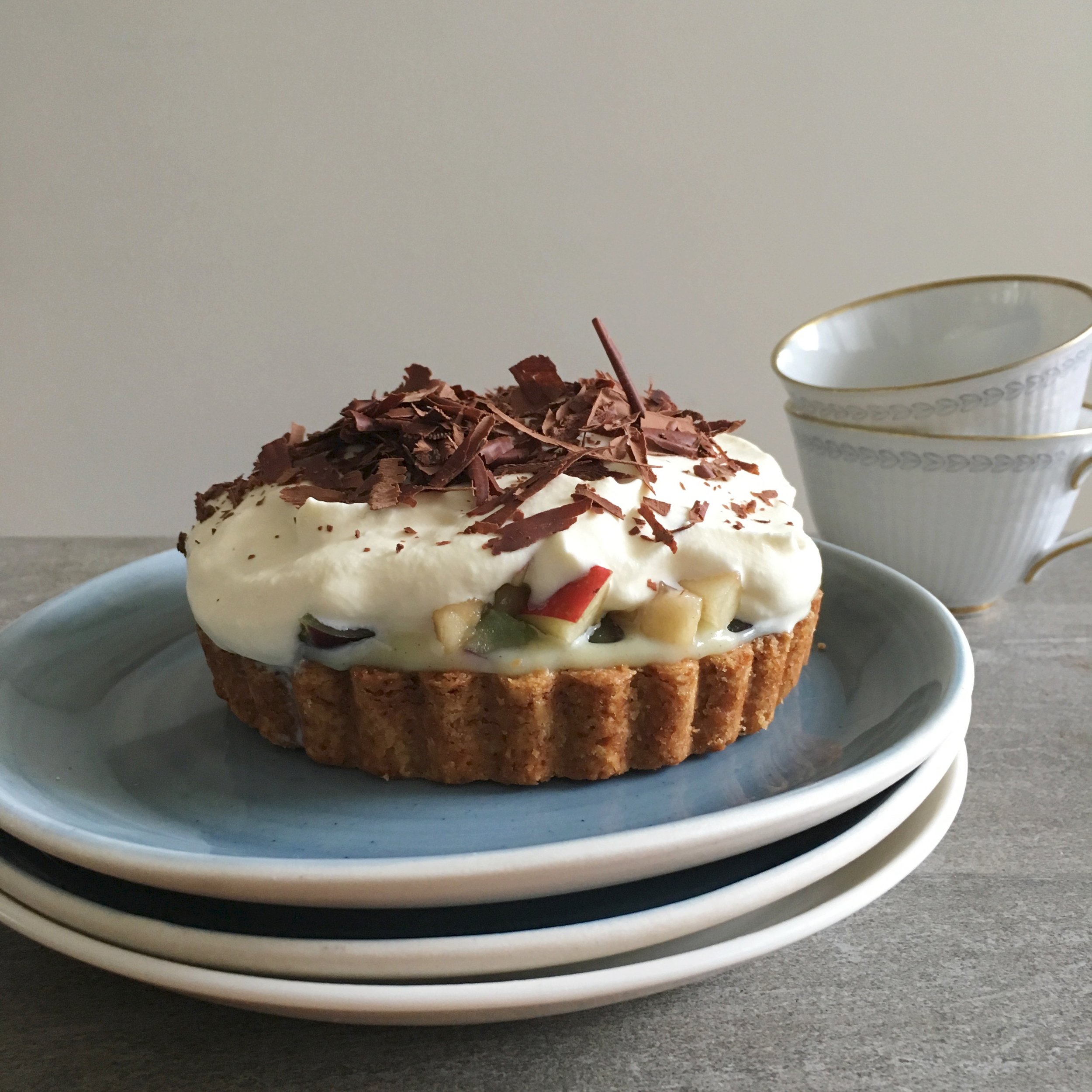 Since I met Christian, my husband, almost 11 years ago he has never really cared much for dessert. He will eat the occasional slice of birthday cake, sometimes order sorbet when we are dining out, but it is not something he looks forward to the way I do. More often than not he will politely decline and go for a cup of coffee or a brandy to finish a meal.

But there is one exception to this rule. A treat he has loved since he was a kid and still do as an adult. It is as simple as it is delicious and has the whimsical name “Monkey food with vanilla cream”. Basically it is just fruit salad topped with a vanilla cream made of whipped cream folded into egg yolks whisked fluffy and creamy with sugar and vanilla seeds. I don’t think you will find a Dane who hasn’t had this growing up, or still light up when presented with a big bowl of fruit topped with billowy vanilla cream.

And so I thought I would jazz it up a bit as a surprise dessert for Christian. It should be recognisable as the dessert he loves so much, playful but at the same time a little more refined. A cream pie seemed like the obvious solution and the result was glorious.

Flaky tart shell, bittersweet dark chocolate, salty/peanutty caramel, lemony vanilla pastry cream, fresh fruit and billowy soft whipped cream topped with shavings of more dark chocolate. It hit all the right spots and then some. My husband made me promise him I would make this for his birthday. In May! And the year after and the year after and the year.. Well, you see where this is going.

The inspiration for the different layers are based on Tartine Bakery’s banana cream pie, I love their addition of chocolate on the tart shells. It keeps them from going soggy and gives a lovely bittersweet note that balances everything nicely. 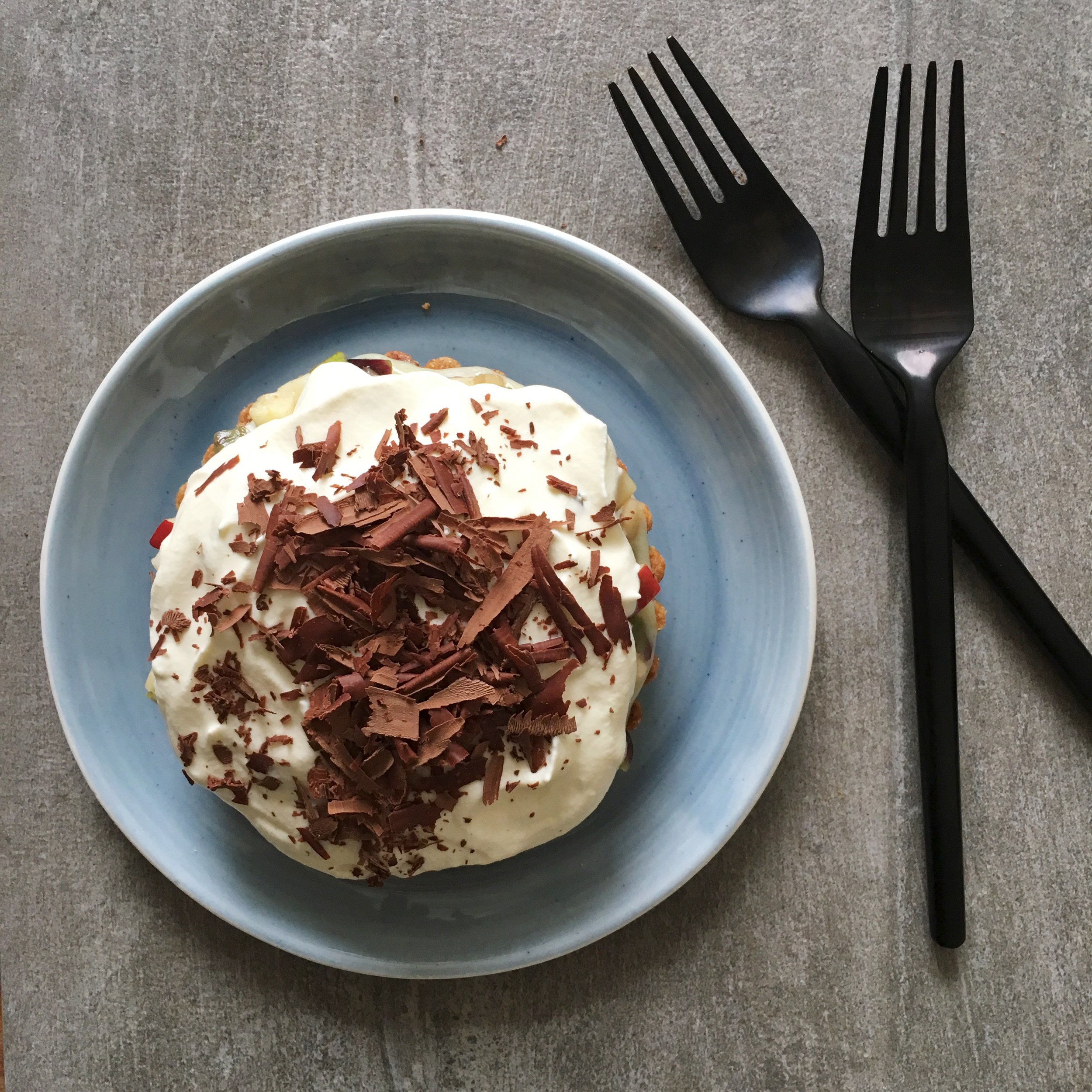 Combine flour, salt and sugar in the bowl of a food processor and pulse a few times to mix together. Add the butter and pulse until the size of peas. Finally add the egg and process until the dough just begins to come together.

Gather the dough into a ball, divide in 4 and press each into a disc. Wrap in cling film and chill the dough for at least an hour. Roll out and line four 10cm/4 inch greased pie tinswith the dough.

Blind bake the shells, lined with foil and filled with dried beans, for 20 minute at 175C/350F. Remove beans and foil and bake for another 10 minutes, or until the shells are golden. Cool completely on a wire rack before turning the shells out.

Add peanut butter and heavy cream to a small saucepan and brung the mixture to just under a boil over medium-high heat. Turn the heat down low.

Melt the brown and white sugar in a different pan over medium heat. When there are no more sugar granules pour the cream over the sugar. Be careful, it will boil furiously at first. Stir to combine, and when the caramel is smooth remove from heat. Allow to cool for about 5 minutes, then whisk in the butter and salt. Whisk thoroughly to ensure a smooth caramel. Stir occasionally while the caramel is cooling.

Place a fine meshed sieve over a clean bowl and set aside.

Whisk together the sugar, cornstarch and egg until smooth.

Split the vanilla bean and scrape the seeds from the bean. Transfer seeds and bean to a saucepan, add the lemon zest and pour in the milk or half and half. Bring to just under a boil while stirring continuously so the milk doesn’t burn.

Pour 1/3 of the milk over the egg mixture while whisking thoroughly. Pour the new mixture back into the saucepan and whisk together over medium heat. Cook while stirring until the mixture just starting to boil and the pastry cream is thickened. Immediately remove from the heat and strain through the sieve into the bowl.

Allow to cool for about 10 minutes, stirring every few minutes. When the pastry cream has cooled slightly whisk in the butter 1 Tbsp. at a time. Whisk thoroughly until the pastry cream is smooth, place a piece of cling film directly on the surface of the cream to avoid a skin forming. Place in the fridge to chill for at least 2 hours.

Once the cream is cold, do not whisk or stir it. It will break down the starches in the cream and make it thin and runny.

Peel the banana and wash the apple, pear and grapes. Cut the fruit in roughly ½cm/¼ inch dice, mix with the lemon juice and set aside.

Remove the shells from the fridge and pour the caramel over the set chocolate in an even 1cm/ just under ½ inch layer. Spoon over the chilled pastry cream, and cover the pastry cream with the fresh fruit salad. Whip the heavy cream until it holds medium peaks and is lusciously soft. Top the fruit salad with the whipped cream and finish with a sprinkling of chocolate curls.

Chill the tartlets for a few hours after assembly and serve cool.