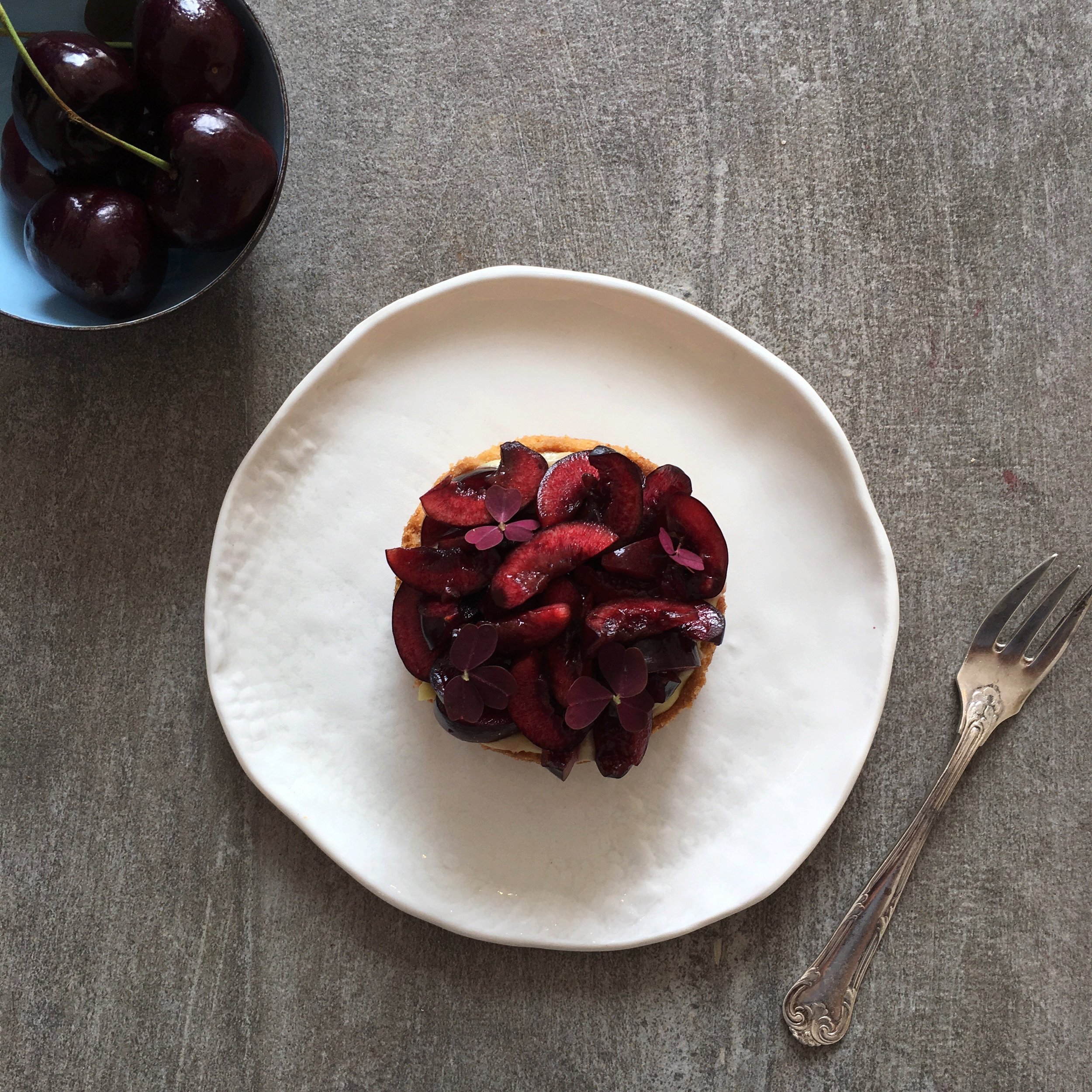 There is something magical about the way almonds and cherries bring out the best in each other. Like they were made for each other. But much as I love these two, I find that combined with tonka bean or even better with mahlab too (dried seeds of St. Lucie’s cherries, it has been used as a spice in the Middle East and Greece for centuries) they get more depth of flavour. The tonka bean brings sour cherry and warming clove and vanilla notes where mahlab adds a sweet rosy floral and bitter almond taste to the dessert. It turns a good cherry tart into a really great one.

If you can’t find either tonka beans or mahlab, you can substitute vanilla for the tonka beans. As for mahlab, there is already an almond frangipane filling in the tart, and you can add a few drops of rosewater to the pastry cream to get that hint of rose in the dessert.

Mix almond and all-purpose flour with icing sugar and mahlab in a bowl. Cut in the cold butter either with a fork or a pastry cutter until the texture is crumbly and reminiscent of wet sand. Add the egg and gently, but quickly work together till a ball of dough. Separate the dough into 4 portions and pat the dough balls into flat rounds, then wrap them in clingfilm. Put them in the fridge to chill for at least an hour.

Roll out the dough balls and line 4 tart rings with the pastry. Chill the lined tart rings for another hour and prepare the frangipane.

Whisk together almond flour, sugar, parsley, butter and egg with a hand mixer until the mixture is light and creamy. Be careful not to overwork the frangipane paste as this will cause it to separate when baking.

Spoon the frangipane onto the pastry, divide the chopped cherries in the four shells and press down lightly. Bake the tarts for 20-25 minutes, remove from the oven and allow the tartlets to cool completely in the tins before turning them out.

Place a fine meshed sieve over a clean bowl and set aside.

Whisk together the sugar, grated tonka bean, cornstarch and egg until smooth.

Pour the milk or half and half into a saucepan. Bring to just under a boil while stirring continuously so the milk doesn’t burn.

Pour 1/3 of the milk over the egg mixture while whisking thoroughly. Pour the new mixture back into the saucepan and whisk together over medium heat. Cook while stirring until the mixture just starting to boil and the pastry cream is thickened. Immediately remove from the heat and strain through the sieve into the bowl.

Allow to cool for about 10 minutes, stirring every few minutes. When the pastry cream has cooled slightly whisk in the butter 1 Tbsp. at a time. Whisk thoroughly until the pastry cream is smooth; place a piece of cling film directly on the surface of the cream to avoid a skin forming. Place in the fridge to chill for at least 2 hours.

Once the cream is cold, do not whisk or stir it. It will break down the starches in the cream and make it thin and runny.